It features a plethora of events across the neighbourhood involving food, crafts, music, and parties for all ages. Loads of community groups in the area have worked together to put on something for everyone over the holiday period.

It’s been coordinated by Hulme Neighbourhood Team, One Manchester and Geeks for Social Change. Working with Age Friendly Hulme and Moss Side we have distributed a What’s On guide to the area.

Join us on 7th December at 3:15 in Hulme Park for the launch event, featuring carol singing and the Winter Light Switch On. It’s followed by an all-ages celebration in the Church of the Ascension until 6:30, followed by some music in the Old Abbey Taphouse for anyone still standing!

Read on to find out everything else that’s happening in Hulme and Moss Side in December!

Please note there are 2 errors on the printed version. Riot Jazz is on Friday, and the Cultural Market and Open Day runs 12-6pm. Sorry for any confusion! 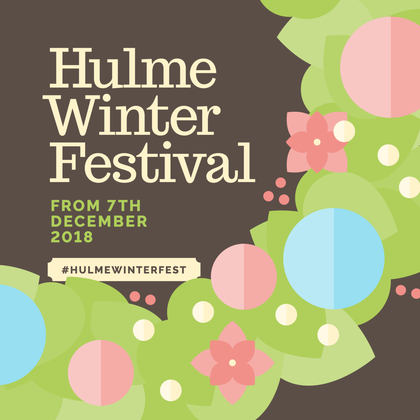